Anyone who follows local news have heard about the alleged involvement of actor Mat Ranillo III in the 10-billion-peso pork barrel scam. For instance, ABS-CBN News has reported about documents showing that Ranillo earned millions of pesos in commissions from mastermind Janet Lim-Napoles. Ranillo, however, has apparently sent feelers indicating his intention to cooperate with the investigation and clear his name.

The news might come as a surprise considering that Ranillo's good looks and charisma cannot be associated with such corrupt acts. Moreover, he is famous for portraying religious movies in the Philippines, a predominantly Catholic country. Those who recall this film roles of his movies might be left in disbelief.

In 1988, he played the title role in Lorenzo Ruiz: The Saint ... A Filipino. This movie was released in the aftermath of Pope John Paul II's canonization of the first Filipino saint. Reruns of Lorenzo Ruiz can be seen on television. Interestingly, I recall that the actors who performed as Ruiz's Japanese persecutors spoke in Tagalog but with Japanese accent.


Eight years later Ranillo portrayed Jesus Christ in Kristo, which is also an adaptation of a stage presentation that were performed every Lenten season during the late '80s and early '90s. Although the dialogue is spoken in Tagalog, the movie has the very appropriate tagline "The Man behind Mankind's redemption." In view of the thickening plot of the pork barrel scam, Ranillo should prove his innocence and gain redemption in the eyes of the public. 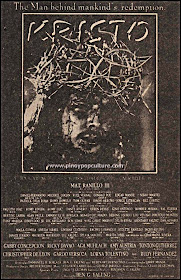